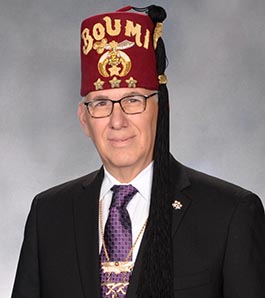 Mark Hartz of Severn, Maryland, is serving his sixth year as a member of the Boards of Directors for Shriners International and Shriners Children’s™. He was elected Imperial First Ceremonial Master, part of the 12-member body that helps govern the Shriners fraternity, during the Shriners 2022 Imperial Session held July 2–7 in Minneapolis, Minnesota.

Born and raised in upstate New York, Hartz moved to Maryland in 2003, where he began his Masonic and Shriners journey. His affinity for Shriners International developed as a boy, when two family members received care from Shriners Children’s™. Hartz has served the people his entire professional life, including positions with local, state and federal service. He currently serves as the Chief of Physical Security for the U.S. Courts.

Hartz has served as a volunteer firefighter and EMT for more than 30 years and is the past president of the Jessup Volunteer Fire Department Board of Directors. He has served as the Chapter Chairman of the Board of the Mohawk Valley Chapter of the American Red Cross. He is an active member of the Associated Italian American Charities of Baltimore.

Hartz and his lady, Kathy, reside in Severn, Maryland.