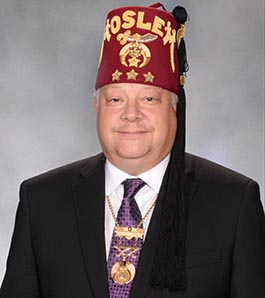 Lawrence J. "Larry" Leib, 33rd Degree,  of Farmington Hills, Michigan, is serving his sixth year as a member of the Boards of Directors for Shriners International and Shriners Children’s™. He was elected Imperial Oriental Guide, part of the 12-member body that helps govern the Shriners fraternity, during the Shriners 2022 Imperial Session held July 2–7 in Minneapolis, Minnesota..

Leib is a third-generation attorney who began his legal career at Leib, Leib and Kramer P.C. in 1994. He was a partner with the firm until 2004, when he left to start his own general practice firm, the Law Offices of Lawrence J. Leib. While he practices in the litigation field, Leib also has a unique specialty in long-term strategic planning for nonprofits, philanthropies and charities.

Leib is a member of the State Bar of Michigan and a fellow of the State Bar of Michigan Foundation. He is a Director of the Sigma Alpha Mu Fraternity Foundation. He served as International President of Sigma Alpha Mu fraternity, which has more than 100,000 members, from 2006 to 2008, concluding 11 years on its International Board of Directors. In 2018, he received the Lifetime Award of Merit for Outstanding Alumni Service in Community Endeavors. He also served on the International Board of Directors for the North American Inter-Fraternity Conference from 2009 to 2015. The NIC annually represents more than 900,000 college men.