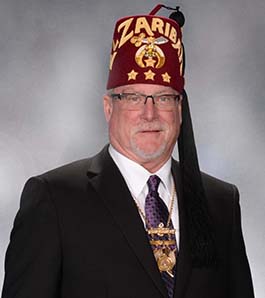 James E. “Ed” Stolze Jr. of Peoria, Arizona, is serving his ninth year as a member of the Boards of Directors for Shriners International and Shriners Children’s™. He was elected Imperial Chief Rabban, part of the 12-member body that helps govern the Shriners fraternity, during the Shriners 2022 Imperial Session held July 2–7 in Minneapolis, Minnesota..

Before retiring in 2017, he was the chief technology officer for a large school district in Phoenix. Stolze is a senior leadership consultant for JoshLind Consulting Company.

Stolze and his late wife, Cheryl, were married for 29 years and have two children, Joshua and Lindsey. Joshua works for a financial investment company in Vancouver, Washington, and Lindsey (Joey) is a Ph.D. Genetic Scientist at the University of Arizona.