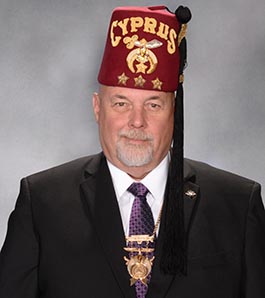 Kevin R. Costello of Tillson, New York, is serving his seventh year as a member of the Boards of Directors for Shriners International and Shriners Children’s™. He was elected Imperial High Priest & Prophet, part of the 12-member body that helps govern the Shriners fraternity, during the Shriners 2022 Imperial Session held July 2–7 in Minneapolis, Minnesota.

Costello served in the United States Air Force and was honorably discharged. From 1982 to 1986, he worked as a police officer for the New Paltz Police. From 1986 to 2006, Costello served as a trooper for the New York State Police. There, he obtained the ranks of Investigator, Sergeant and Lieutenant – Bureau of Criminal Investigation. He also supervised the New York State Police Counterterrorism Unit and was assigned Troop “F,” where he supervised 100 investigators in five countries and received five Superintendent’s Commendations.

Costello was then recruited by Barons Security Agency, in Montgomery, New York, where he served as Vice President and C.E.O. from 2007 to 2008. Costello is the retired president and C.E.O of Alert Security and Investigations Inc., which he formed in 2008.

Costello and his wife, Jill, have been married since 2009. He has four stepchildren, Loren, Joseph, Katie and Stephanie. He has three grandchildren, Kevin Alston, 7, Blake Graham, 3, and Rae, 6 months.