A Milestone for Riley 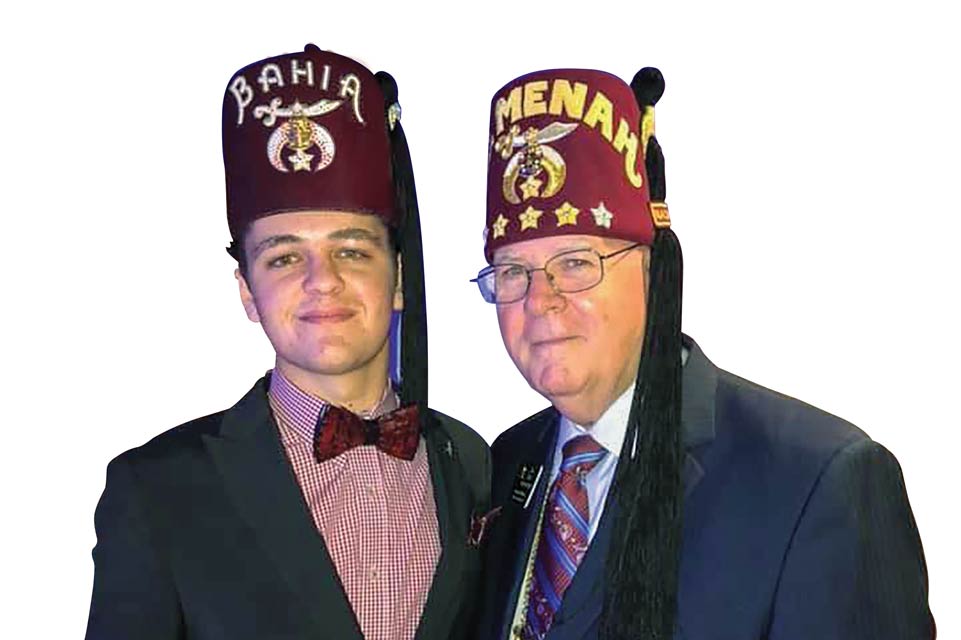 Riley participated in the ceremony that made him a member of the Shriners International fraternity on Saturday, Oct. 17, 2020. It is a milestone that the young man has been looking forward to for a long time.

Riley was a National Patient Ambassador during the 2018–2019 year, when Jim Cain served as Imperial Potentate. Imperial Sir Cain made a surprise visit, attending the ceremonial and supporting Riley. The two became very close during their shared year supporting the fraternity and the health care system, and Riley vowed that one day he would become a Shriner, too.

But what made the day most special for Riley was sharing it with his father, Rick. The family wasn’t sure whether Rick would be able to attend, because he had been diagnosed with a terminal illness. But when the special weekend came, Rick was feeling not only well enough to attend but also to present his son with his fez.

“Riley has worked very hard for this for a long time,” said his mother, Tina. “He is super happy to accomplish this while his dad was here with us. It is a bittersweet moment for us.”

Riley said he is thankful to have been able to share this moment with his father, and regrets that they won’t be able to experience more together as Shriners. “It’s a very emotional time,” he said.

During his time as National Patient Ambassador, Riley met many Shriners who urged him to join the fraternity. A theme was that each Shriner hoped to bring in one new noble. “And my dad was going to bring in me.”

Becoming a Shriner is a way that Riley can support Shriners Hospitals for Children. “It’s another thing I can do to give back,” he said.

The moment was extremely special for Imperial Sir Cain as well. “As with all dads, it is a special time throughout Masonry when you get to participate in degrees and initiation for our sons,” he said. “We talked many times about him following his dad into Masonry and to the Shrine. When he made that decision, I was overjoyed.

“I look at Riley as if he were my son, and what a joy it would be to see it happen,” Cain said. “That is why our Legacy Program is so important. It allows our family members to participate in the degrees that create great memories. Legacies tend to stay on as members due to those special bonds between family members.

“As we now know,” Cain said, “Riley’s dad was called to his heavenly home shortly after the ceremonial. I can’t speak for him, but I am sure the memories will always be there! Congratulations Noble Riley! You are part of my Shrine family! Love you, Son!”

Others who were able to travel to the Orlando, Florida, area to attend the ceremony include former National Patient Ambassador Karolina. Riley and Karolina’s families have become close over the years, and the two young people appreciated seeing one another again and sharing this special moment.